Velvet and is a wingless wasp

The Mutillidae are a family of more than 3,000 species of wasps (despite the names) whose wingless females resemble large, hairy ants. Their common name velvet ant refers to their dense pile of hair, which most often is bright scarlet or orange, but may also be black, white, silver, or gold. Black and white specimens are sometimes known as panda ants due to their hair coloration resembling that of the giant panda. Their bright colours serve as aposematic signals. They are known for their extremely painful stings, hence the common name cow killer or cow ant. Unlike real ants, they do not have drones, workers, and queens. However, velvet ants do exhibit haplodiploid sex determination similar to other members of the Hymenoptera, including the Vespoidea. 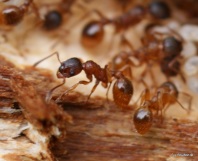 Distribution
Locally common all over the British Isles. It occurs in almost all of Europe and Palaearctic Asia.

Status (in Britain only)
Common. The species is not regarded as scarce or threatened.

Foraging behaviour
They feed on honeydew from aphids and scale insects and drink nectar from flowers. They are aggressive and sting freely.

Nesting biology
Nests are in the ground, in tufts of grass, under stones and in rotten wood. Colonies are usually polygynous with an average of 15 queens and a thousand workers or more…. BWARS

There are 12 type of Myrmica ants in the uk.

The photo above is a Dealated Queen which means they have been on a mating flight and have rubbed or bitten their wings off. 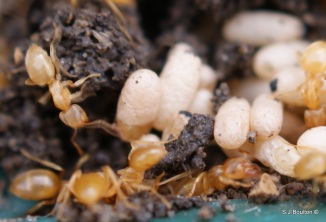 Distribution
One of the commonest ant species, and recorded throughout Britain.
Worldwide found in North America to Japan and from North Africa to the Arctic.

Status (in Britain only)
This species is not regarded as being scarce or threatened.

Habitat
Found in a wide range of open sunny habitats including grassland, parks, gardens, edges of woods and clearings. In undisturbed habitats large numbers of mounds can be present.

Flight period
Flights have been recorded from late July to August.

Foraging behaviour
Lasius flavus workers are rarely seen above ground. They feed on small insects and the honeydew of root-feeding aphids.

Nesting biology
Nests can be founded by groups of queens or by single queens, but established nests normally have only one queen. Nests are built in soil, sometimes started under stones and if undisturbed a substantial mound can be raised that may last for many years and often having its own flora. Nest can also be found under stones and in almost any suitable grassland.