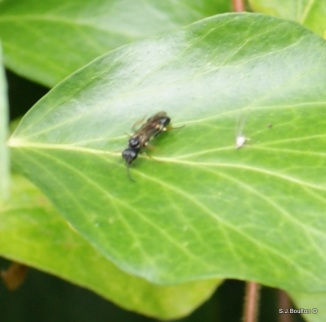 Due to the poor focus of this photo I cant narrow this wasp down there are two wasps that look similar with distinct white marks they are  episyron rufipes and ceropales maculata both are found locally . Again now I know its in my garden i will keep an eye out for it and try to get a better photo.

This isn’t a new sighting and the wasp has been posted before on my blog but this is one at work .

I saw this wasp on my front path wrestling with this spider. which it paralysed then dragged it off. It will drag it to a burrow where it will lay an egg on it which will then hatch and devour the spider. 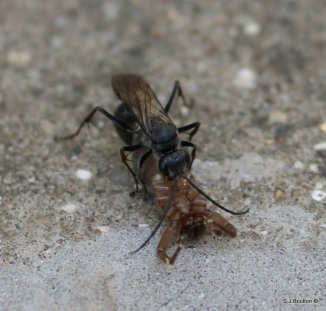 I wont complain because I hate spiders.

The spider is a Mouse Spider I believe.

A generally scarce species although perhaps especially prone to under-recording through its secretive and elusive nature.  Food/ prey these are most frequently spiders in the family Clubionidae, but there are other records for gnaphosids, salticids, agelenids, thomisids, lycosids, segestriids and anyphaenids.The nesting behaviour (which is summarised by Richards and Hamm (1939) and Day (1988)) is rather more complex than that of most pompilids and demonstrates tremendous versatility on the part of the female. The nests are built in cavities in a great variety of situations, non-British reports citing nests beneath stones, in stone walls, in tree stumps (often in old beetle burrows), under bark and in crevices of tree trunks, in empty galls of cynipid wasps, in empty burrows of earthworms or cicadas, in old snail shells, in beehives, in an old cloth in a garden, behind a door frame, in a loft and in an old mirror in a garden. The nests may sometimes be mixed with those of other aculeates such as Anthophora bees andAncistrocerus wasps and, indeed, A. carbonarius may use old nest holes of these species. Females construct small, barrel-shaped cells which are laid on their side. These are manufactured from small pellets of clay obtained from damp areas, such as river banks or beneath stones, and carried to the nest site between the mandibles and a group of specialised hairs on the basal mouthparts. Water is also collected separately, probably to aid nest building. Completed nests may consist of ten or more cells (as many as 34 on one occasion) arranged in a block. These nest cells, constructed prior to prey capture, are stocked with a wide variety of spiders obtained from amongst vegetation. One prey item is placed in each cell. The wasp may fly with small prey individuals (unusual in the Pompilidae where the prey is usually dragged along the ground)….. BWARS 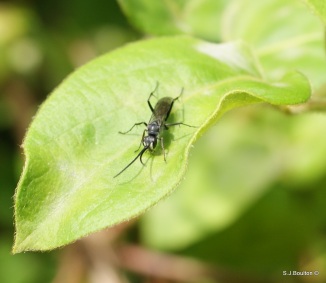